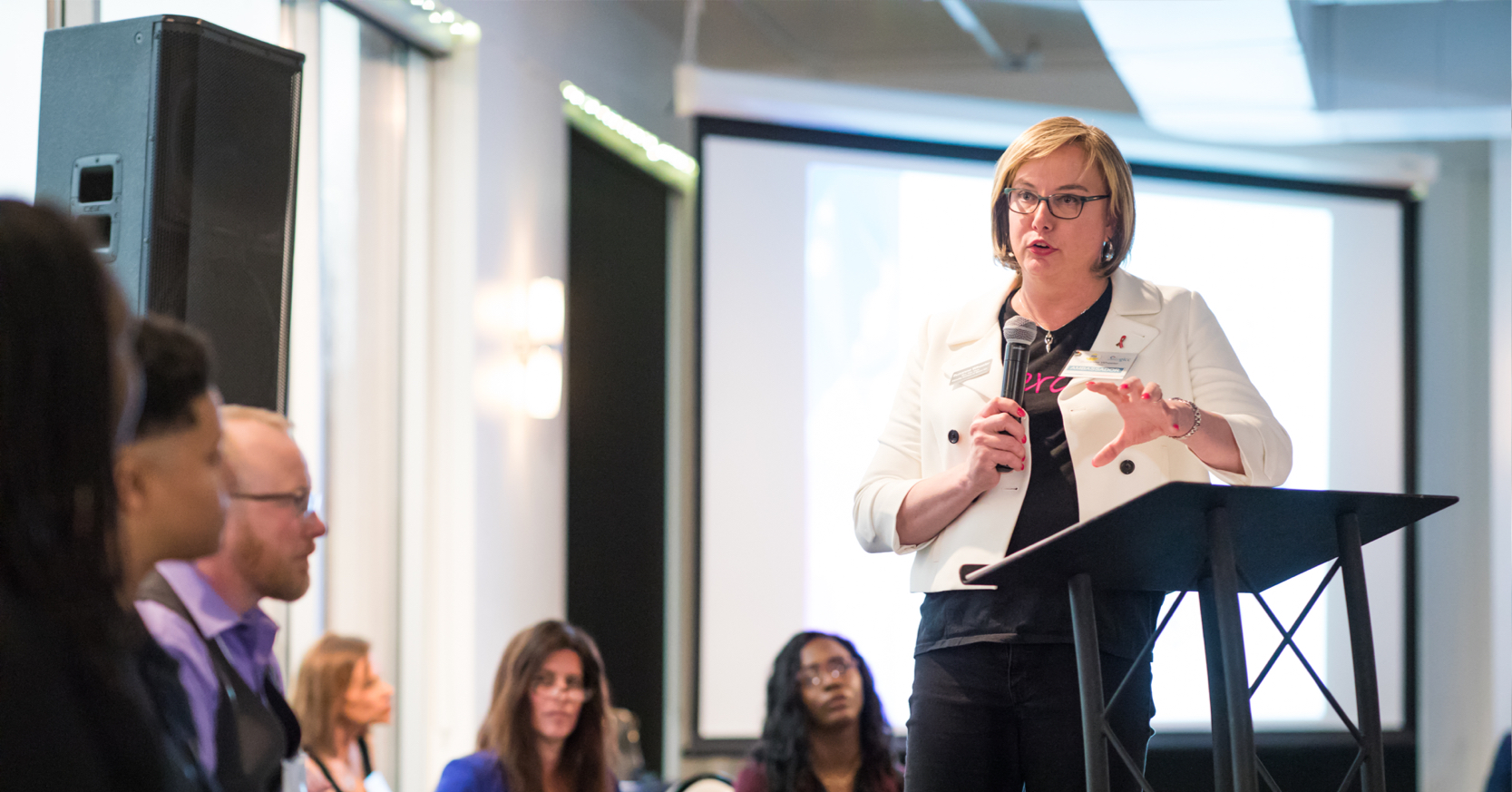 Kansas City, Missouri // Friday, August 30, 2019 // www.midamericalgbt.org – The Mid-America Lesbian, Gay, Bisexual, and Transgender (LGBT) Chamber of Commerce has formally announced the selection and instatement of its new full-time Executive Director, Suzanne Wheeler. Wheeler’s tenure officially began on August 1, 2019, and she was introduced to chamber membership at the August Business-to-Business (B2B) Network event on the same day.

The search for a new full-time Executive Director was announced nearly a year ago, on September 8th, 2019. The decision was based on increasing time and resource requirements related to sustained membership growth, programming, and community organizing. Mid-America LGBT Chamber of Commerce President, Danny Zaslavsky, said at the time, “the board recognizes we need to transition to a full-time staffing model that can effectively support our expanding priorities.” During the year long search, the chamber reviewed over 300 resumes and conducted over 50 individual interviews.

Suzanne Wheeler has a Bachelor of Science in Special Education and Business from Emporia State University and a Master of Arts in Strategic Studies from the U.S. Army War College in Carlisle Pennsylvania. While deployed with the U.S. Army, Wheeler led a team of 78 military, government civilians, and local nationals in the development of over 300 new businesses impacting 13,900 residents in Laghman Province Afghanistan.

At home, with the National Guard, Wheeler held various Director-level positions that included responsibilities related to operations, budget management, training, community building, and direct personnel supervision. Most recently, Wheeler worked as the Volunteer and Outreach Manager for Planned Parenthood of Great Plains and then as a Senior Project Manager for the University of Missouri Kansas City School of Nursing and Health Services.

“I think Suzanne’s experience, and especially her time in the military, is exactly what we need to help us meet the growing demand of our membership,” says Zaslavsky, “she has a great combination of project management and operations experience, strong policy development and community building, and made a great impression on the board.” He also cited core competencies including budget management, strategic planning, partnership development, and recruitment and retention.

“I am thrilled to be part of this organization at such an important time in its existence,” says Wheeler. “The chamber has grown so quickly due to valuable programming, networking opportunities, and community partnerships,” Wheeler continues, “but what I think the board recognizes right now is that when you grow quickly and provide a valuable service, expectations only grow with you.” The organization counts over 300 members with nearly 1,200 active participants and is one of the largest local LGBT representative organizations in the Kansas City metro.

“We have a huge responsibility and opportunity to continue building up LGBT and allied business owners, entrepreneurs, and professionals, giving our community economic leverage to stand for equality,” says Wheeler.

“The contribution of the entire team at the Lintecum Group to our chamber can't be overstated,” says Wheeler, “we wouldn’t be where we are today without them and I’m so grateful for their counsel and advice now and Into the future.”

In addition to a new Executive Director, the Mid-America LGBT Chamber of Commerce also recently approved a name change from The Mid-America Gay & Lesbian Chamber of Commerce and is set to release new branding at its September 12th B2B Network Event, co-hosted by Big Brothers Big Sisters of Kansas City. Registration for this event is available online at http://bit.ly/septb2b and is free for members and $20 for non-members.

The mission of the Mid-America LGBT Chamber of Commerce is to advocate, promote, and facilitate the success of the LGBT business community and its allies through the founding principles of equality, inclusion, economics, and education. The purpose of the organization is to create, identify, and enhance business opportunities for LGBT and LGBT-friendly organizations, thereby fostering a more inclusive and vibrant economy in Kansas City.